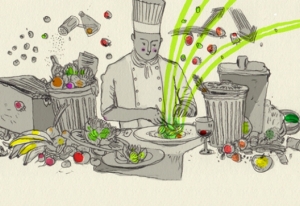 A piece I wrote for One-Earth.com.

The Rubulad space in South Williamsburg might be better known for its raucous all-night extravaganzas, but two Sunday evenings a month, a more low-key, though no less open-minded gathering takes over. Run by folks from a variety of local groups such as the Toyshop collective, Time’s Up and the New York Freegans, Grub is a community dinner that takes the “reuse” of the 3Rs of sustainability to heart. Almost all the food served at Grub is made from ingredients rescued from the dumpsters of grocery stores around the city – food thrown out not because it was actually spoiled, but because it was on the date of its pre-determined expiration, or because the shopkeepers simply wanted to make room on the shelves.

A sad fact of the industrial food system is that it costs grocers and distributors virtually nothing to throw out perfectly good products to make way for the new. Their loss is Grub’s gain, as it allows them to churn out a tasty multi-course vegetarian/vegan meal (usually including desert) for up to 40 people. While food sourced from the trash might be a little too local for some people’s tastes, the quality—and volume—of what’s thrown out is more than a little shocking. Politics are a part of the blend at Grub, but the argument in favor of creative reuse is really made through the food on everyone’s plates.

Another added benefit of dumpster-dived food is that the organizers are able to serve the masses on a donation-only basis. With money out of the equation, social interaction comes to the fore, and conversations spring up between all sorts who were strangers before they walked in the door. On the nights I’ve been, attendees included artists, musicians, activists, journalists, grad students, and some visiting Europeans who’d heard about the event through the grapevine. Of course, the kaleidoscopic surroundings, encrusted with the remnants of Rubulad parties past, certainly help to throw everyone off their guard. If, however, freegan politics are your taste, you can learn the ins and outs of dumpster-diving through their periodic trash tours, that range through neighborhoods throughout the city.

Grub has relocated since this piece was originally published. Visit the In Our Hearts Collective for more information.