Public/Transit from Kristin Miller on Vimeo.

This project is currently in development.

To the world at large, San Francisco may seem like an egalitarian technotopia, but a vast network of private buses for city-dwelling workers of Facebook, Google, Apple, and other tech giants may be creating a new digital divide within the city.

Silicon Valley is home to ever-increasing numbers of globally significant tech and internet corporations and start-ups. Since the early 2000s, the vast majority of their young employees have preferred to live not in the neighboring suburban communities of Palo Alto, Cupertino, and Mountain View, but in hip, urban San Francisco, Berkeley, Oakland, and San Jose. Frustrated by the lack of transit infrastructure quickly connecting these locations, the big tech companies have followed Silicon Valley’s DIY ethos to create a huge network of private bus lines serving desirable urban neighborhoods where clusters of their employees live. This past year a Bay Area design and infographics firm, Stamen, set out to map this network and shine a light on what had previously been something between an open secret and an urban legend. The new visibility of the private bus network has become a flashpoint for tensions over changing demographics in the city, as the buses take a toll on existing bus stops and roadways without contributing tax revenue to the city, and drive up rents to exorbitant levels around the quasi-secret pick-up locations. Most young Silicon Valley workers have starting salaries north of $80,000 a year, and they are moving into areas at the margins of the city that once provided livable neighborhoods for teachers, transit and service workers, and artists, as well as the city’s historic communities of color.

Public/Transit weighs the pros and cons of these rapid changes and the material consequences they have on lives of those who aren’t traveling at the speed of the information superhighway. 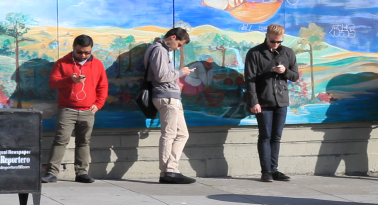